About the city composing process... 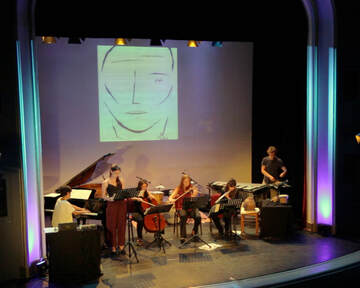 The City Composing Brussels
The City Composing is conceived as an experiment to open the music composition process to the audience. The aim is to outline the audience’s role not just as a receiver but as an active participant. At the same time it's a challenge to stimulate new musical practices by mixing fully-written music, graphic scores and improvisation.

Therefore the music creation is collaborative. It starts by the citizen writing an idea in the notebook, then it’s transferred to the composer, arranged and shared with the musicians.

Throughout this project we explore the redefinition of the compositional dynamics by bringing closer the relationship between the public and the musicians.

An important aspect is to generate local engagement. By giving voice to the inhabitants of a city or neighbourhood, we encourage the inclusion of children, elderly people, migrants and all hidden-collectives in a free cultural event. Of course to have music studies is not necessary, everybody has its own musical sense.

One of the essential goals of this project is to act as a musical disseminator. The content and explanation of the project have been always well documented for people not so familiar with the field. Thus the concert is carried out with an accessible explanation of the project and the musical context by Hara Alonso. With this approach we strive to reach new audiences and to develop interest in contemporary music and notation.

There is a common characteristic in all cities: the diversity. Each score is different and it evokes a specific idea or state of mind. Maybe that’s what make us similar, the plurality. Let’s listen to the diversity of the cities !
A short explanation about the contemporary music  notation
​
To standardise notation is to standardise patterns of thought and the parameters of creativity. Our present abundance of notations is as it should be. It makes our differences more clear.
Sylvia Smith

During the 20th century the idea of score shifted from the conventional model to new notational forms, including graphics, texts and images. From Earle Brown to Hans-Cristoph Steiner, composers have been innovating the notational possibilities and challenging the concepts of music and sound. The inclusion of new sonic languages and aesthetics have brought a wide palette of musical practices such as improvisation, theatre and performance and means. The variety of notations are almost as extraneous as the amount of composers: text based scores, collages, video games, ancient runes or pictures. There are scores with more or less accurate instructions for the performers and others are more suggestive or poetic.
Some examples of graphic scores: 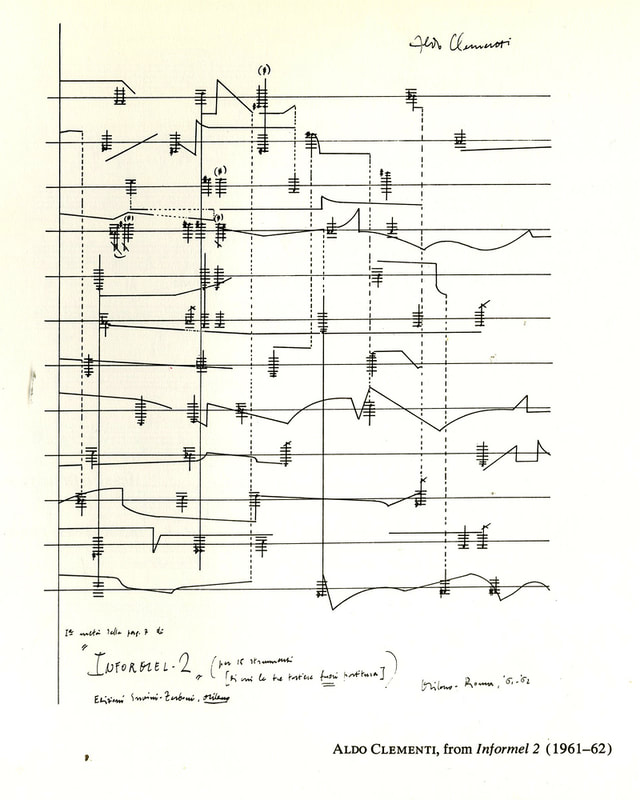 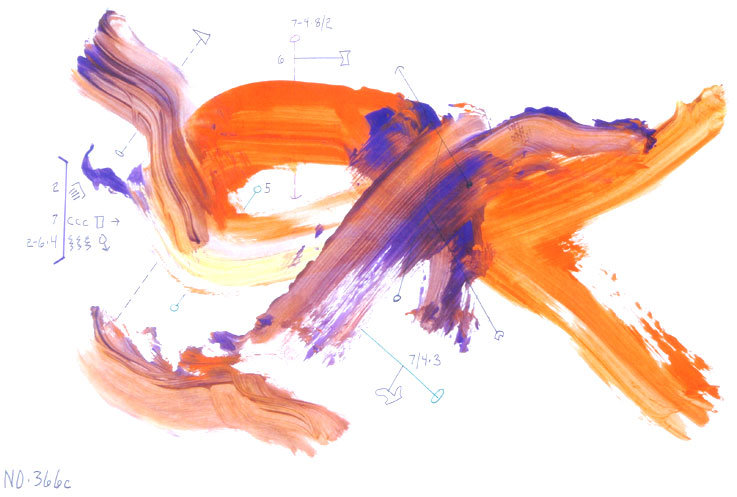 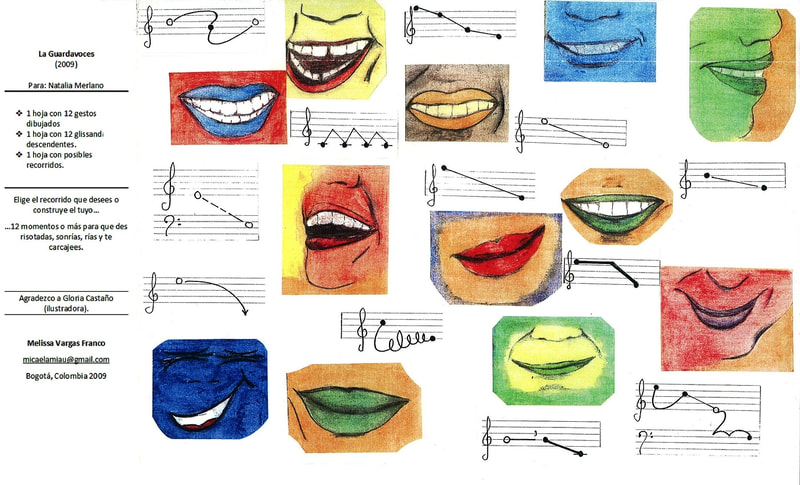 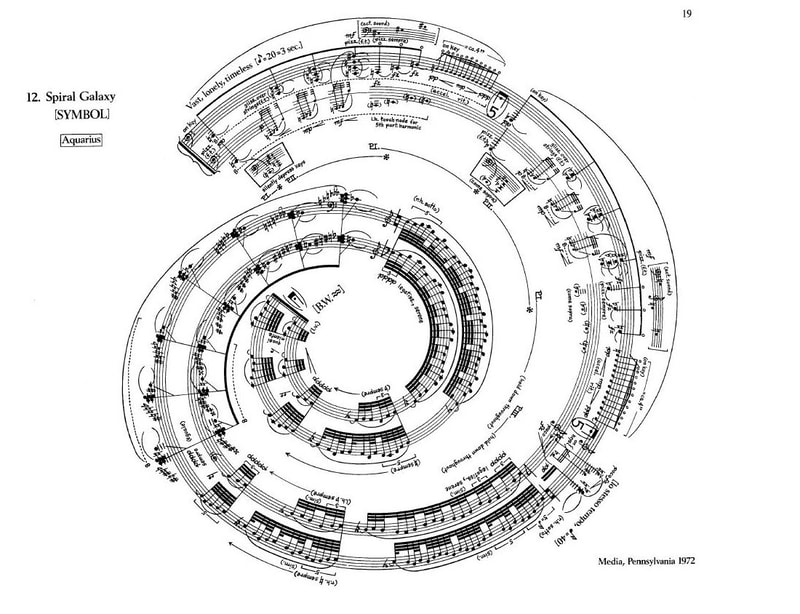 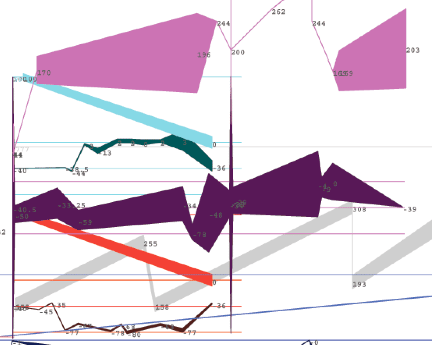 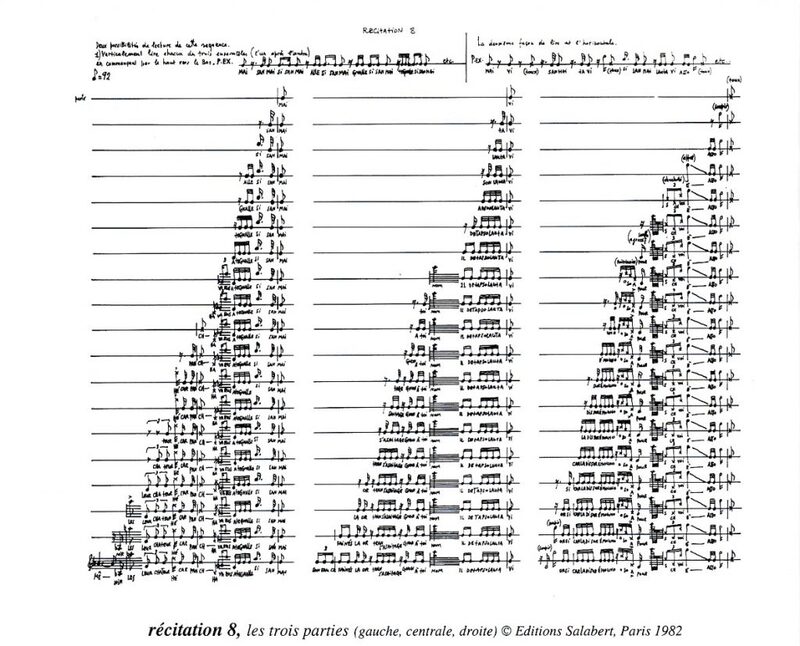 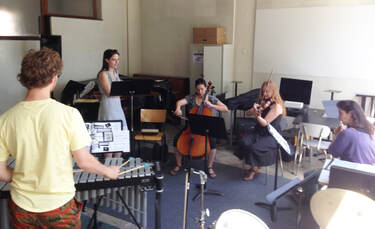 Rehearsal with the ensemble in Brussels
The work with the musicians
​
​The City Composing is a collaborative process also within the ensemble. The material found in the notebooks is very diverse and also the way we perform it varies depending on the characteristics of the piece. Sometimes is fully written, sometimes taken as graphic score, improvisation, video and text scores, video games, etc. Another possibility is to interpret it in a new way by using the proposed material. The goal is to play them as accurately as possible, this means that if someone wrote a fully composed piece we play like it is, but if someone writes a very abstract text probably we will take it as a very open source of inspiration, so the result can be very surprising (p.e. in The City Composing Lyon: Accune idée qui sont ces personnes???). Hara Alonso works together with the performers to find out the solutions to arrange the scores in the best possible and interesting way.

Some examples of the scores and the arrangement of them:

This piece (fig.1) was found in Brussels, it's a little melody.

Figure 1.
The theme was taken as material to create a piece based in the traditional form of "theme and variations" for flute, cello and piano (Fig. 2).
Various scores found in the notebooks: 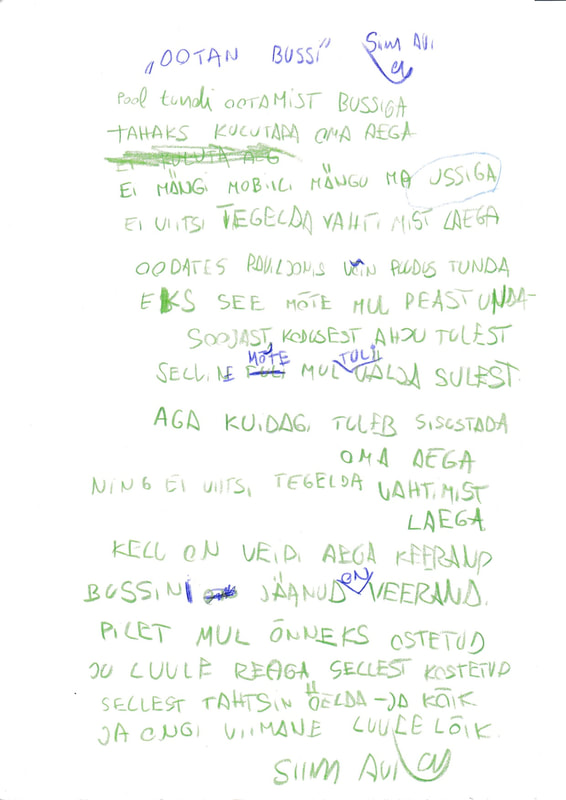 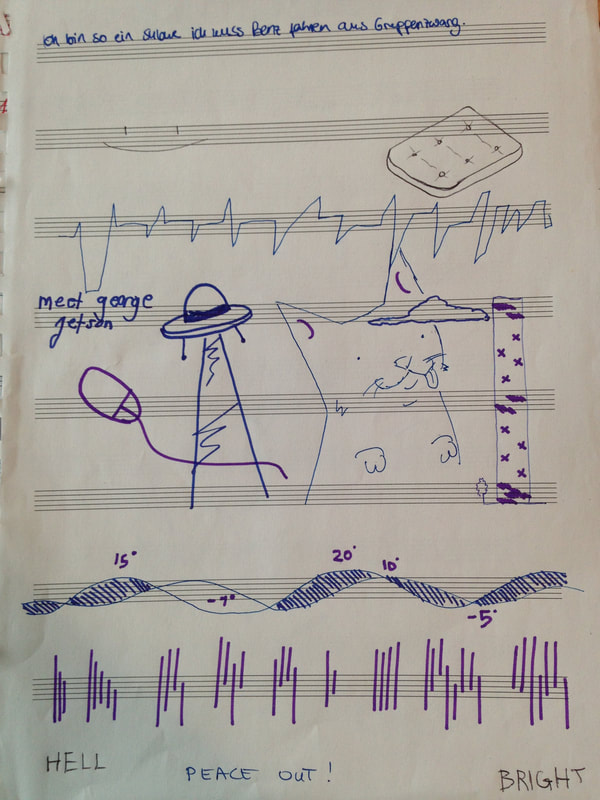 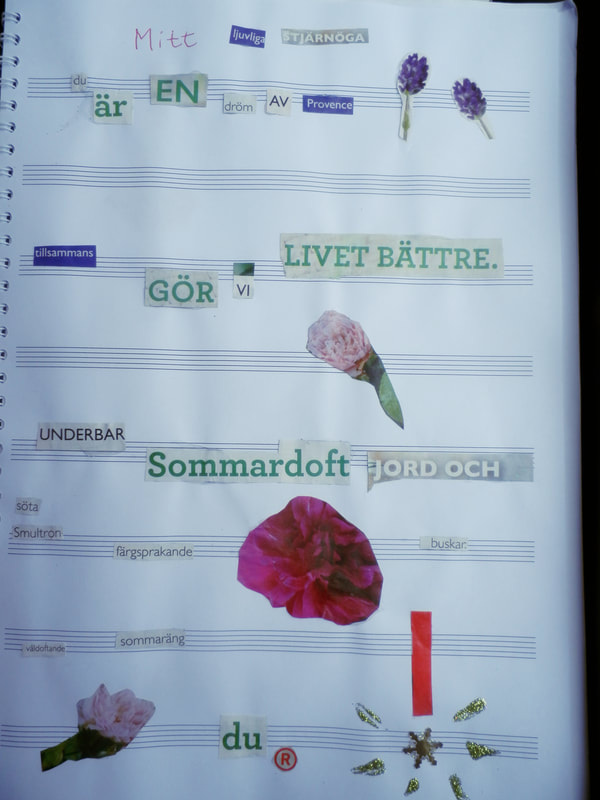 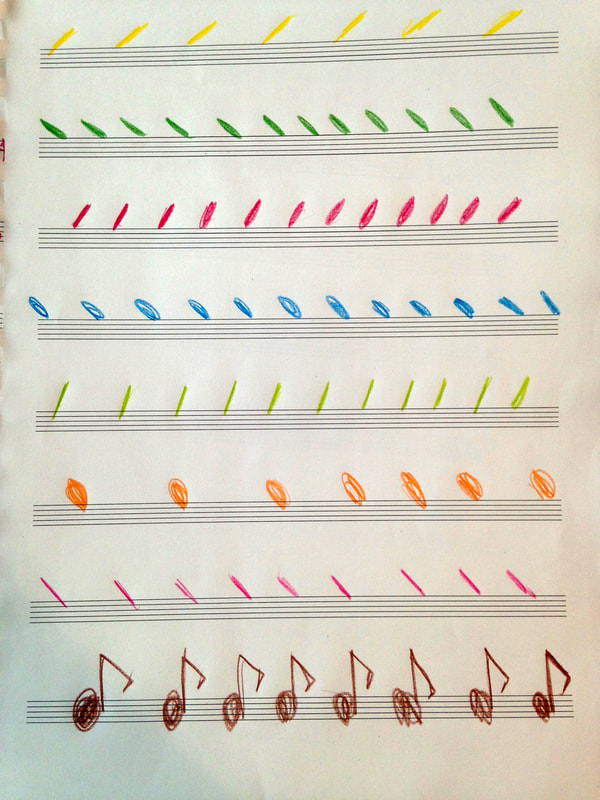 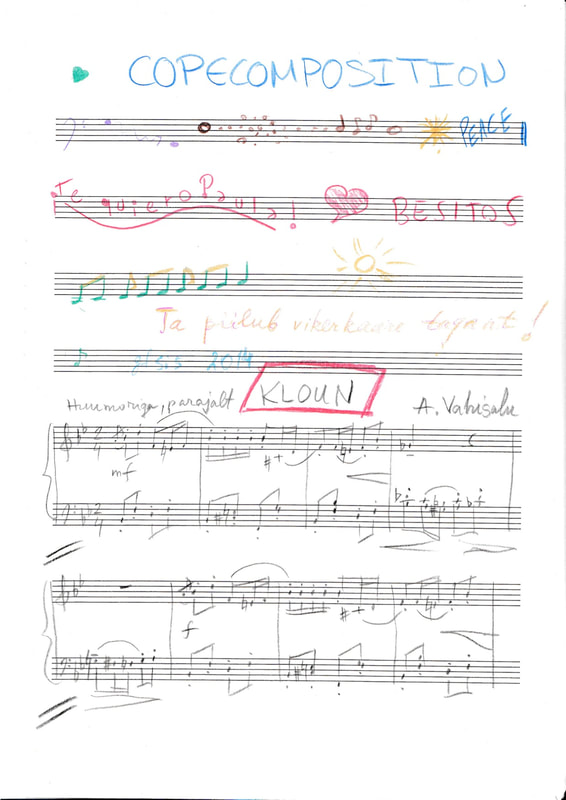 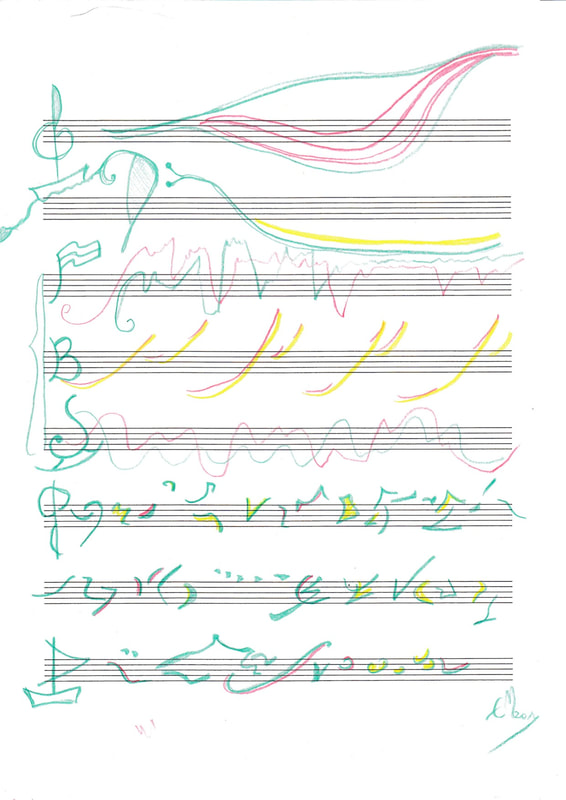 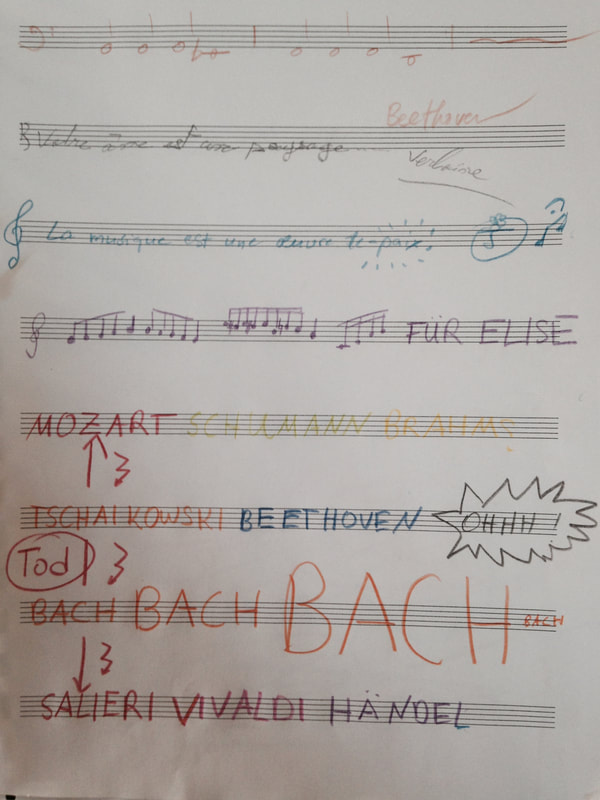 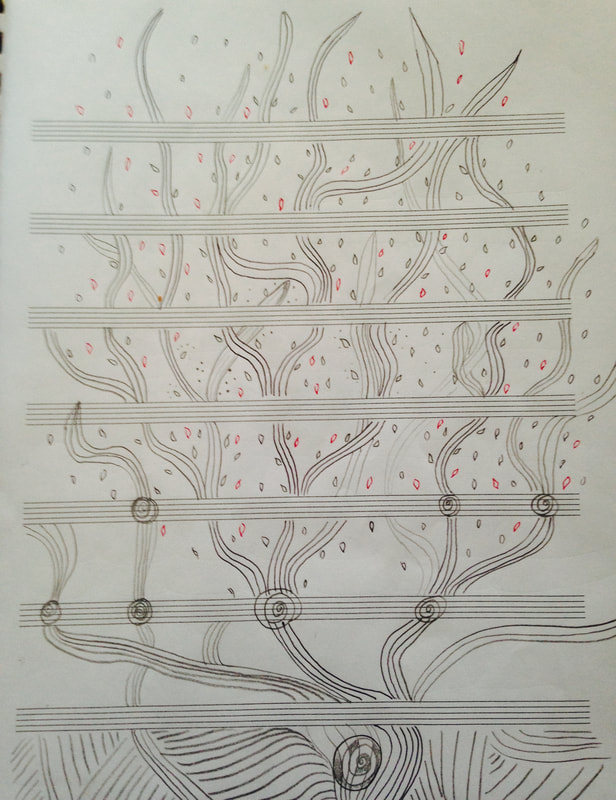 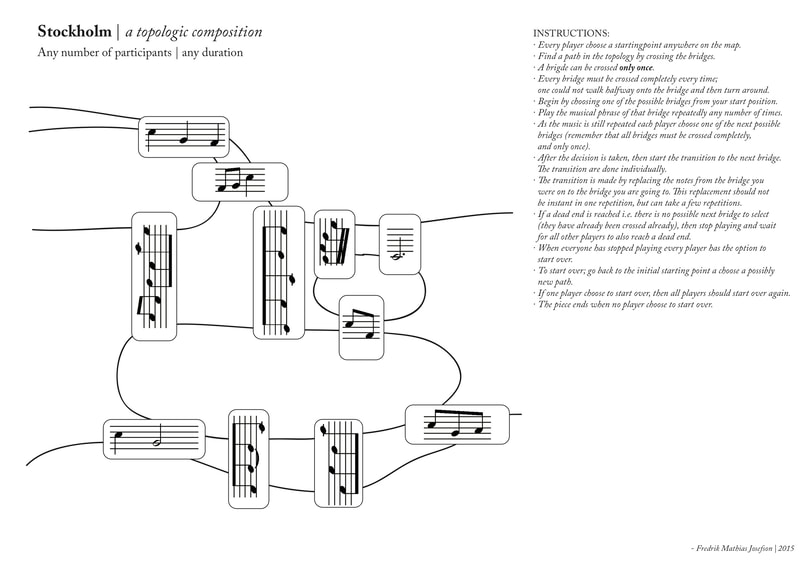 The participants many times come to the concert and express their opinion about what we did with their contribution. In Estonia there is one very emotive anecdote: one person wrote down a fully written piece for piano (Kloun, The City Composing Tallinn), and left his phone number in the notebook written. I called him, Andres Vahisalu, 70 year old man, to invite him to come to the concert. He was very happy by the fact that we played his piece, "I couldn't imagine that someone would play my music anymore!". In Lyon a woman working at the information desk in the Conservatoire wrote very beautiful texts that we played (Le Torcol Foumiller, The City Composing Lyon). She was very sceptical in the beginning: "I'm not very much into contemporary music...but ok, I participate". After the concert she was completely fascinated about the sounds, the connections and the way we interpret her texts. 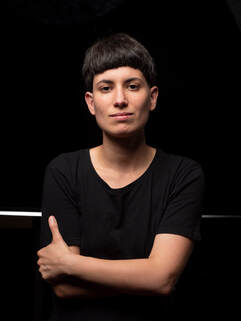 ​        Hara Alonso is a pianist and composer based in Stockholm. Emerging from a classical contemporary background, in her current practice coexist electronic and instrumental music along with interactive works.

She has always been interested in visual arts and fascinated with the cross-collaboration between art forms. She started exploring graphic notation and real-time composition techniques and developed the concept of 'The City Composing' in 2014 in the context of the master degree CoPeCo- Contemporary Performance and Composition.


Currently she is freelance musician based in Stockholm collaborating in various circus, dance and pedagogy projects.